As viruses are exposed to environmental selection pressures, they mutate and evolve, generating variants that may possess enhanced virulence. Some of the primary concerns that public health officials have as these new variants continue to emerge include their viral transmissibility, reinfection rates, disease severity, and vaccine effectiveness.

How do RNA viruses mutate?

Therefore, organisms must find an equilibrium between a high mutation rate that allows them to adapt to changing environmental conditions, and a low one that lessens the incidence of catastrophic mutations. Small DNA viruses may encode their own DNA repair, and some RNA viruses also share the ability to check for and repair replication errors.

Vignuzzi & Andino (2012) note that the offspring of RNA viruses, with genomes commonly falling into the size range of 7-12 kilobases (kb) in length, tend to bear one or two distinct mutations per nucleotide site. The severe acute respiratory syndrome coronavirus 2 (SARS-CoV-2) genome is thought to be around 27-31 kb in length, which increases the overall number of mutations acquired, without necessarily increasing the incidence rate.

What variants of concern have been found? 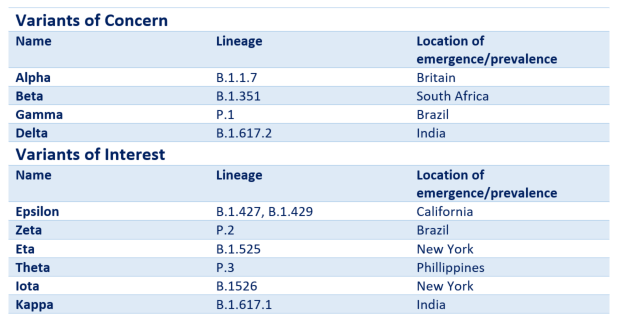 The World Health Organization (WHO) recently announced a nomenclature system for naming and tracking SARS-CoV-2 that will assist in the public discussions of variants as they emerge. This nomenclature system was developed by virological, microbial, nomenclature, and communication specialists from around the world to ensure that the SARS-CoV-2 variants are easy to pronounce and avoid any potentially stigmatizing terms. To this end, the expert group convened by WHO has recommended using letters of the Greek alphabet as names for each new SARS-CoV-2 variant.

One new strain with a particularly large number of mutations was first noted in the United Kingdom in September 2020, termed VOC 202012/01 (a variant of concern – December 2020). The B.1.1.7 variant is also known as 20B/501Y.V1 by the United States Centers for Disease Control and Prevention (CDC), as well as the Alpha variant according to the WHO. This strain, which has since been termed the B.1.1.7 variant, has a total of 23 mutations with 17 amino acid changes.

Since its identification in Britain, the B.1.1.7 strain has been found in over 90 different countries around the world. In fact, as of April 7, 2021, the B.1.1.7 variant is the most common source of new SARS-CoV-2 infections in the United States.

What is concerning about this specific strain is that it is thought to be 30-50% more infectious than the original SARS-CoV-2 strains and may be more deadly. However current vaccines still work on the strain.

The B.1.1.7 strain has the following key mutations:

Additionally, the strain often shows a deletion of amino acids 69 and 70, also seen to arise spontaneously in other strains, causing a conformational change of the spike protein.

At position 681, a mutation from a proline amino acid to histidine has also been found to arise spontaneously in several strains and is prominent in B.1.1.7, as is a mutation to open reading frame 8, the function of which is not yet fully understood.

Another strain, B.1.351 also shares the N501Y mutation. The B.1.351 strain is also known as 20C/501Y.V2 or the Beta variant. The Beta SARS-CoV-2 variant was first detected in South Africa in October of 2020 and has since been found in more than 48 other countries since then.

The B.1.351 strain has the following key mutations:

This South African variant is believed to be about 50% more transmissible as compared to previous variants that have been identified in South Africa. To date, the Pfizer-BioNTech vaccine has been found to be 75% effective against infection by this variant. Furthermore, vaccine effectiveness against severe, critical, or fatal disease due to SARS-CoV-2 infection with this variant, as well as the B.1.1.7 variant, has been found to be 97.4%.

Unfortunately, the University of Oxford-AstraZeneca vaccine has been found to be less effective against the B.1.351 variant, which has led South Africa to suspend the national roll-out of this specific vaccine.

The P.1 lineage of SARS-CoV-2, which is also known as 20J/501Y.V3 or the Gamma SARS-CoV-2 variant, was first described in Japan by the National Institute of Infectious Diseases, thought to have arrived in the country from Brazil on the 6th of January. The variant has been traced back to Manaus, Brazil.

The strain is not thought to be more deadly but is more transmissible than the original strain of SARS-CoV-2.

The P.1 strain has the following key mutations:

The P.1 lineage is a branch of the B.1.1.248 lineage and bears 12 mutations in the spike protein, including the previously mentioned N501Y and an exchange of glutamic acid with lysine at position 484 (E484K). It is a close relative of the B.1.351 strain.

The E484K mutation had previously been reported in a different lineage originating in Brazil as early as the summer of 2020 (B.1.1.28).

Clinical trial data using the Moderna mRNA vaccine has found that a single booster shot of this vaccine successfully increased neutralizing titers against the virus and the B.1.351 and P.1 variants in individuals who were previously vaccinated. Notably, this booster shot involved the use of the mRNA-1273.351 vaccine, which is a strain-matched vaccine that has been derived from the original Moderna mRNA vaccine denoted as mRNA-1273.

The CAL.20C variant which spans the B.1.427 and B.1.429 lineages is believed to have emerged in California in May of 2020. Both of these variants, which are collectively termed as the Epsilon variants, are believed to be 20% more infectious than preexisting variants strains although does not seem to be spreading as fast as some variants like the B.1.1.7.

The B.1.427/B.1.429 variants have now been detected in North America, Europe, Asia and Australia. Researchers have found that neutralizing antibodies obtained from people who had previously received either the Moderna or Novavax vaccinations were slightly less effective against these variants, but still generated effective protection. Although the Pfizer vaccine was not studied in this paper, researchers believe that since it uses a similar technology to that which is incorporated into the Moderna vaccine, that it would likely have a similar response.

This strain has the following key mutations:

It appears that neutralizing antibodies from both the convalescent plasma of patients who have recovered from COVID-19, as well as those which are produced post-vaccination are less effective against these two variants; however, further work must be conducted to confirm this observation.

The B.1.617 strain has been dubbed the “double mutant virus” due to two of the concerning mutations it carries. These two key mutations are:

The rapid rate at which this variant has spread across India indicates to some scientists that this variant is highly transmissible. This observation is largely due to the fact that the B.1.617 variant appears to have a greater prevalence as compared to the other variants that have been detected in India, such as the B.1.618 variant that was originally present in West Bengal.

As the B.1.617 variant continues to spread at an alarming rate in India, three different subtypes of this variant have been identified which include B.1.617.1, B.1.617.2, and the B.1.617.3 variants. As compared to the first subtype of this variant, which is also known as the Kappa variant, data suggests that the B.1.617.2 or Delta variant has a growth rate advantage that has allowed for it to become the dominant subtype found in much of India.

To date, it is not yet fully understood what makes the B.1.617.2 variant so transmissible and whether current vaccines can offer protection against this variant. However, one study produced by a team of researchers at the University of Cambridge found that the neutralizing antibodies generated by individuals who were previously vaccinated with one dose of the Pfizer vaccine are about 80% less potent against some B.1.617 mutants.

Furthermore, a team of German researchers also found that neutralizing antibodies collected from patients who were previously infected by SARS-CoV-2 were 50% less effective at neutralizing these circulating strains. It should be noted, however, that this data does not necessarily indicate that the vaccines are ineffective against these variants.

The P.2 lineage of SARS-CoV-2 variants, which are otherwise known as the Zeta variants, independently accrued the spike E484 mutation and was originally identified in Brazil in April 2020. To date, there is limited information on whether monoclonal antibody therapies and the antibodies generated post-vaccination have reduced efficacy against this variant of concern.

The apparent spontaneity of the development of some of the key mutations that have been discussed here suggests that the virus could be experiencing convergent selection pressures around the globe, with the most transmissible forms outcompeting their cousins.

The current mutations of concern that may be aiding the spread of coronavirus include:

The D614G mutation is of B.1 lineage and appeared in early 2020. This mutation quickly spread across the world and became dominant.

This mutation is present in several lineages including B.1.345, B.1.17 and P.1. This mutation changes the amino acid asparagine (N) to tyrosine (Y) at position 501 in the receptor-binding domain of the virus’ spike protein, which may aid the virus in bind to cells more tightly.

This spike protein mutation has been found in several lineages and may aid the virus in avoiding some antibody types. In it, there is an exchange of glutamic acid with lysine at position 484.

This spike protein mutation is also mutated at position 484, with the exception that the glutamic acid is substituted with glutamine. This mutation is thought to increase immune evasion and ACE2 binding.

This spike protein mutation has been found in several lineages, including P.1 and B.1.351. It is also thought to help the virus bind to cells more tightly.

The L452R spike protein mutation has appeared in several lineages. In this mutation, there is a leucine to arginine substitution at amino acid 452. The mutation is thought to increase immune evasion and ACE2 binding.

Notably, laboratory studies have found that specific monoclonal antibody treatments may not be as effective in treating COVID-19 caused by variants with the L452R or E484K mutations.

The Q677 mutation is located on the side of the SARS-CoV-2 spike protein, thereby suggesting that it may play a role in increasing the penetrability of the virus into human cells. To date, the Q777 mutation has been identified in several different SARS-CoV-2 variant lineages, seven of which have been identified in the United States. The Q677 variant has not yet been determined to be more infectious as compared to preexisting mutations.

Which regions of the SARS-CoV-2 genome mutate the most?

A large meta-study performed by Koyama, Platt & Parida (2020) gathered over 10,000 SARS-CoV-2 genomes worldwide and compared them to detect the most common mutations, identifying nearly 6,000 distinct variants.

The most divergent genome segment was ORF1ab, which is the largest by far as it occupies around a third of the genome. ORF1ab is transcribed into a multiprotein complex that is eventually cleaved into a number of nonstructural proteins that are involved in transcription. Some of these proteins are the target of anti-viral drugs remdesivir and favipiravir, which may be a cause for concern regarding the development of a strain against which these drugs have no effect.

The second most diverse region of the SARS-CoV-2 genome is around the spike protein, which must remain largely conserved in order to interact with ACE2. Some mutations, such as D364Y, have been reported to enhance the structural stability of the spike protein, increasing its affinity for the receptor. However, most are likely to lessen the virulence of the virus to such an extent that the lineage quickly dies off.